Amid growing anger at the sale to foreign buyers of almost two-thirds of London’s tallest residential skyscraper, which includes no affordable housing, it has emerged that not one London borough that set targets has met them in the last six years.

Councils sometimes secured as little as 13% affordable housing when their stated targets were as high as 50%, according to analysis commissioned by BNP Paribas Real Estate, which advises local authorities and house builders in negotiations. On average, the 34 boroughs achieved 22% affordable housing, on targets ranging from 30% to 50%.

A key factor has been the rising value of land for commercial use, which has made developers more willing to abandon housing schemes and turn sites over to more profitable office buildings, the research suggests.

The difficulty that councils have faced in persuading developers to meet their needs illustrates the scale of the challenge facing the new London mayor, Sadiq Khan, who has pledged to dramatically boost affordable housing. Khan revealed on Wednesday that only 13% of the homes given planning consent in London last year were affordable. He has said his “long-term strategic target” is half. 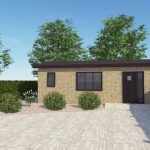 Zebra homes have created one of the world’s most innovative techniques to build affordable homes in restricted time scales.